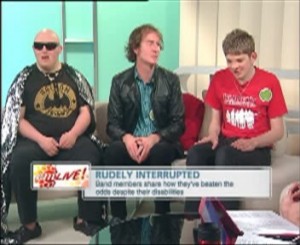 “Rudely Interrupted” is an Australian band with a difference.

5 out of its 6 members share a range of mental and physical disabilities, but they play every bar of music themselves.

Since their debut live performance in 2007, the group has released an album and gone on world tours, inspiring thousands with their music.

They are in Singapore for their first-ever perfomance in Asia.

We have 3 of the band members in studio with us today, Rohan Brooks, Rory Burnside and Sam Beke to share more about their music.