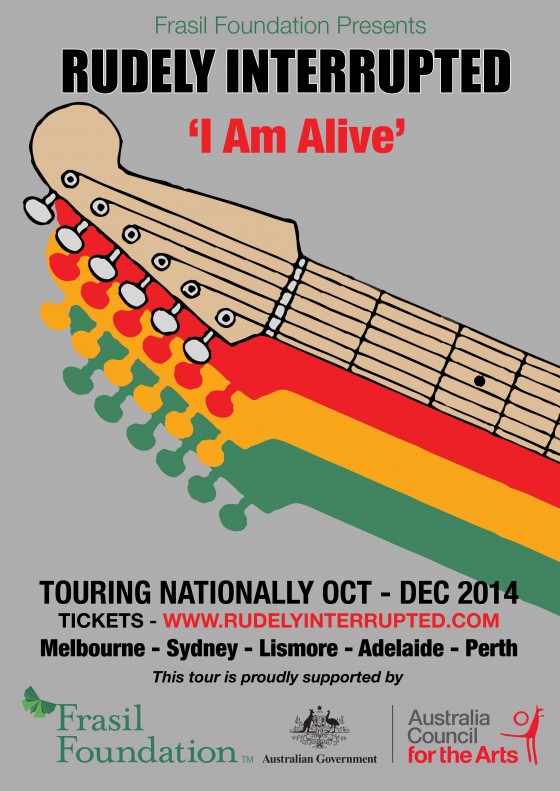 Unique Melbourne indie pop rockers, Rudely Interrupted have announced the release of their new single, I Am Alive and new EP of the same title due out October 3.  With support from Australia Council for the Arts and The Frasil Foundation, the band will be celebrating with a national Australian tour including three festivals kick starting in Melbourne on October 5 and heading through Sydney to play Oxford Arts Factory on October 26, Lismore Workers Club on October 31, Northcote Social Club (Melb) on November 9, Governor Hindmarsh (Ade) on November 16 and the Rosemount Hotel (Perth) on December 3.

In 2008, Rudely Interrupted became the first ever indie band to perform at the United Nations in NYC and have since become regulars on the global touring circuit, only recently returning from their thirteenth international tour which saw them perform with the eighty piece, Alberto Pio Orchestra in Italy and then over to the US to perform at the Twenty Wonder celebrations at the iconic Doll Factory in LA.  Other key performances over the years include Laneway & Woodford Folk Festivals in Australia, NXNE Music Festival in Canada, Rock An Der Wabe festival in Germany, Spikes Asia Awards in Singapore and VSA Arts Festival in Washington DC and a spot on Australia’s Spicks and Specks to name just a few.

With support from The Frasil Foundation, Rudely Interrupted are taking over the world and inspiring other individuals with challenges and disabilities to give everything a shot and follow their dreams.  “We are here to show you that you can do anything you want,” beams Brooks, “with the right support and a lot of hard work, truly, anything is possible! We are living proof of dreams coming true and together with the Frasil Foundation we will be touring the world with our powerful message of hope and ‘anything Is possible.”

‘Love You Till I Die’ Available TODAY!