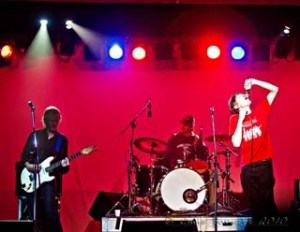 We have a few stories from Woodford and once again they’re different, inspirational and darn right bloody awesome!

We left around 9am on boxing day so xmas was cut short for rock n rollers like us and Rory let us know about it! Connie didn’t come to this show, it’s getting very hard for her these days and we don’t want her to end up in a wheelchair so we all decided it was best to tackle this show without her.

So on the first day we drove to Dubbo around 10 hours, after a great drive and a good sleep that night we were up early and headed towards Armidale to collect Harry. We had to drive the back way to Brisbane to pick up our soundy (Harry the Haz) from Armidale NSW and after a comfortable drive everything went to plan and on budget!

Armidale is about 5 hours from Dubbo and we made it in 6 so that’s good for us! Ha! We picked up Harry after a breif hello with his mum and headed up to Brisbane. Very exciting for all of us and we were all pumped to be on the road again and heading to Australia’s biggest and best festival Woodford. The tunes were pumping out from the ipods and the vibe was uplifting! What could go wrong!

We made it to Glenn Innes, filled up the van and stopped for a quick bite to eat. At the service station we were told the road to Grafton was closed due to floods, but we were heading north and didn’t think too much of it. We traveled on a further 300kms and were coming up to Warwick about 160kms short of Brisbane and looking forward to arriving at our accom for a well deserved break to prepare for the show the next day.

There was an errie feeling as we drove into Warwick about 6:30pm and everything seemed too quiet, as we approached the bridge river crossing to head on up to Brisbane the SES were their with the police. The van came to a holt and Rory asked why we were stopping, Chloe said we needed a little rest and myself and Harry went to find out what was happening. All roads to Brisbane are closed due to floods the SES told us. Ouch! We arrived back to the van and Rory and the guys were very keen to move on ahead, as we passed on the information to the band the reality hit home to us all. We’re going to miss the bigest gig of our lives! Arghhh!!!

We were running around trying to gather the right information as to what we could do to make it to Brisbane by 10am the next morning. All the locals were saying there’s no way we could get there and we may be stuck in Warwick for 2 days or until the river subsides. No way said Rory, we are going to make this gig and that’s the end of it.

Tempers were on edge as we tried to find out what our options were. There was 100’s stranded and all the accommodation was full up, the police were putting people up in the local school and Chloe went to talk to the local authorities about our options. They suggested we turn around and go back to Armidale. Argghhh!! I rang the program director at Woodford and told them of our delemma, Hannah was great and we kept in touch! Man, what a devestating end to the year for us..

We thought we might as well turn around and head back to Stanthorpe and stay at the caravan park to get some sleep and see what our options were from there. We booked ahead as we knew everyone was in the same situation and bookings were going fast. We can’t have tents we need appropriate accommodation for the guys and we were lucky to get one of the last cabins.

We grabbed a bite to eat and headed towards the Stanthorpe caravan park, we called ahead for the address and much to our disappointment and surprise, they gave our booking away! Well this was very frustrating. We rang Harry’s mum and she offered to put us up for the night, but that was another 5 hours drive..

The whole time we were on the phone and internet trying to find out flood information so we could make the right desicions as to what our next options were. After about another 3 hours drive we arrived back at Glenn Innes and refuelled. At the service station we over heard a guy saying his mother had just driven the road into Grafton and after a few calculations we realised we could potentially make the show with 2 hours to spare if we drove all night. Our show was at 12:00pm and it was now 1am. If we drove all night we could make it. I asked everyone if they were prepared to give it a shot and we all pulled together and hit the road RUNNING!! What a team!!

We made it to Grafton at about 2:30am and from there it was about 7-8 hours to Caboolture and we could make it with 2 hours to spare. Seems like everything we do as a band we are thrown challenges from all directions, but the “nothing will stop us” attitude has got us this far and we knew if we worked together we could pull it off. We drove safe and all through the night and arrived in Caboolture for a quick sleep before heading to the festival. It rained all night and all day and we finally arrived at the festival gate, exhausted, but ready to ROCK!

We played the concert stage and the MC on the stage introduced the band and told the audience of the commitment we made to make the show. It was the biggest stage the guys had ever played and the audience was huge. The performance was simply amazing and Rory lead the band like a true champion. Josh nailed everything and Sam invented a new character called “Ligtning Man” He literally bought the weather with him!

What a gig and what a reception from the audience, we recieved a standing ovation and the applause just kept on going and going and going! It was the best feeling in the world knowing we could go through all of that and still get up and perform. It simply blew me away!

I knighted the band true rockers that evening and there would have been other bands that would give up in that situation, but not us, no way!

The next day we performed on the Joyluck Club stage and the show was even better after a great rest and plenty of food to revitalise us all. We signed records and posters and the response was simply awesome so hats off to you all for your support! We made a heap of new fans and met up with some old friends and we thank Rachel for her respite and Woodford for all their support for the band. WE DID IT!

So from all of us: Cath, Chloe, Harry and the band! Have a great year and live it like it’s your last!

I Am Alive Available NOW Pre-Order from iTunes